Well, July was a funny old month, and no mistake. The rain fell, the summer came, went, and came again, and I did myself the opposite of proud.
It started against Linden Park, where the age-old issue of people playing out of their league came back to haunt me. This time it was a bowler who has no business plying his trade in div 10. simply too quick, and too accurate. He cleaned us all up, and sent me back into the hutch with an lbw shout I had no argument with. Annoying, but that’s life. Then came a short run of half-starts in which, frankly, I’ve been struggling with my natural inclinations after the last few decent innings.
The scores of 11, 14, 17 and 12 aren’t so bad when taken in context, but they’re nowhere near enough. Against the Goldstone Villains, in the 8-a-side T20 Lastmanstands format I opened the batting as I had a gig to review, hit a few nice shots and was yorked trying to up the ante. At Laughton I was lucky to get a long net, and was seeing and hitting the ball so well right-handed, and we were scoring so slowly, I went in dextrous and very aggressively. Fergie got one to bounce and took the edge. Annoying, but no biggie, as they say. Then against Jevington I had a long partnership with Steve Setters on a damp wicket with a slow outfield, switching to right-handed to up the tempo. I hit the ball four times to the fielder at cover, hard before going straight. My shot knocked the bowler off his feet but he held onto the catch. Again, in a low-scoring game, not a bad innings. Then against Uckfield I hit three fours, one over short leg’s head, before hanging my bat at a wide delivery and dragging the ball onto my stumps. Very frustrating.
Then things went horribly wrong.
I wrote about my first twenty innings, and how I’d scored more by this point left-handed then right. Then travelling to Ashdown Forest, scene of my epic 78 last year, everything went rather ragged. Stuck in the outfield, I touched the ball three times. Then a fourth as the ball grazed the underside of my bat as I was yorked first ball. A good ball, but no foot movement. The following thursday, at the T20, I started right-handed, and got a shooter: bowled first ball. Oh, fucking joy. Then against Hastings, where the bowling attack was young but damn good, and I came in at 12 for 3, I blocked for 8 overs, hitting a fair few straight, cover and square drives for nothing, edging two balls for singles and eventually, you guessed it, dragging on.
Finally, at Sheffield park, I used up 22 balls of our innings before falling LBW to a ball which went straight on and kept low … following one which bounced alarmingly and turned practically square.
So. 9 innings, 57 runs. Utter shit. July was plainly not my month.
The question is, now that I can bat right handed again, and seem to be getting knocked over as a lefty, or simply scoring too, too slowly, ought I go back to my natural game?
Has the experiment forced upon me run its course?
Is my indecision – I bat contemplating when I ought to switch – leading to my downfall.
I really don’t know. 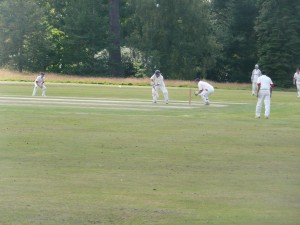