So! My latest teaser is in All Out Cricket and can be found here

Since that post, the world has turned once more, and my weekend’s batting sort of took off … well, until Sunday, when on a damp pitch, the ball cut through the turf and from a length kicked up at my face … I couldn’t quite get the bat away in time, caught for 1 measly run. But it wasn’t all bad!
On friday, I guested for Seaford against a touring side from Kent, Greenheath. I fielded very poorly, to the point where I was pretty much applauded for touching a barely moving ball. But when it was time to bat … well, I had a net session and, to be frank, was giggled at I looked so poor. But, as Peter the club grandee pointed out, perhaps a touch ironically, ‘cometh the hour …’.
I went in at no. 5, batting lefty, and looked as poor as ever, though refusing to miss straight ones or feather edges. Batting with the club captain who was looking in great nick, we shared 11 runs, including one of my trademark one-handed pull/sweeps for four. This, frankly, amazed everyone, and I was off. But not before the skipper did himself like a kipper, bringing in Kevin Ramsey, their overseas player from Barbados.
Did I mention it was practically blowing a gale from the sea on the Seaford Salts? My shades had so much salt encrusted on them the light was refracting all over the shop, and a lost hat travelled a good fifty yards. Running downhill and downwind was, ahem, a breeze, but uphill? Like wading through molasses.
Anyway, we started to build a partnership. Lots of singles. Good to bat with someone who knows the game. He started to chide me gently for blocking, and after I’d hit 18, I decided the rate needed to increase so … I changed stance. To much amusement. Now, the previous weekend I registered 2 (two) ducks as a righty, but I figured my eye was in. I was finally dismissed LBW (by their lefty, ironically) with a fifty in sight. D’oh! But of a stand of 96 I scored 3 fewer than the overseas player. Result!
On saturday, I tried the same trick. I tickled my way to 20 or so and then, knowing we need to up the rate, switched and proceeded to batter the bowling (though, to be fair, I was badly dropped as lefty and righty), my final thirteen balls (of 66) netting 25 runs. This time, I was robbed by a scoreboard error as we came in an over early. Still, 44no more than respectable.
So, apparently, if I get my eye in … 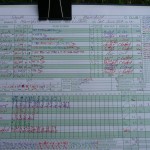 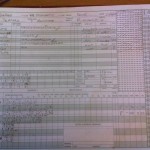 1 thought on “A sneaky wee switch”