Well, after May’s thrills, June has been a mixed bag culminating in a run of some sort of form. My innings this season now read:

So, I’ve actually arrested a decline in performance this year.

My past four innings have been very interesting, not least as a couple were scored properly, that is, with no of balls faced. See A sneaky wee switch for details. On Tuesday I found myself at Seaford once again, this time keeping quite tidily, and choosing to go in at no. 5 rather than open, mainly to avoid Carl Simon, their strike bowler with a first-class pedigree.
Naturally, they opened with dobbers. Three wickets down and in I came, batting with Rahul Chauhan, from Delhi and currently overseas player with Hailsham. He castled me at Chalvington so it’s nice to play with him. He’s a top bloke, too … irrepressibly enthusiastic. We put on 79 together, the top partnership, with Rahul registering his first ton while I was at the crease.
I got a lot of stick from the oppo, and how they laughed at my first attacking stroke, a one-handed pull to backward square for four. As I pointed out to the bowler’s piss-taking, if he was a better bowler maybe I’d use two hands. Oh, of course, on came Simon. He bowled off four paces, and is still one of the quickest bowlers I’ve ever faced, not to mention the most accurate. One edge flew through the slip’s hands too quick to snaffle. An inside edge went for four. The ball hit the splice with thudding power. He started to bowl at speed to Rahul, who simply carried on slapping the ball around. Urged to push on, I switched to right-handed, and after another pulled four, a quicker yorker did for me.
But this pushing on thing. Rahul hit 124, Curtis Cooper 19 off 51 balls, while my 18 came from 34. No-one else made double figures. I wonder … 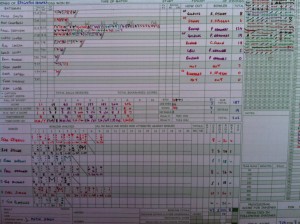