So. All caveats and disclaimers apply. This is a piece I wrote a while ago but couldn’t quite post … it’s about the venn diagram of sex, dating, and Parkinson’s (and its medications) … hold very tight please …

You know when she’s on the brink. There’s a short pause, then a nervous intake of breath. It’s not sharp, not this time: more like the slow traverse of an unshod foot over an uncertain pathway in the dark. The atmosphere thickens, resisting inhalation, but once it’s been sucked in, there it stays. Her breath held, your own bated in sympathy, it happens. END_OF_DOCUMENT_TOKEN_TO_BE_REPLACED

‘So, where do you see yourself in ten years’ time?’ If I’d been asked that question in 2006, I would have seen a me very different to the one that sits, laptop atop lap, slowly tap-tapping out the words you are reading. I had recently handed in the draft of my PhD thesis to my supervisors, and awaited their approval. It was a long time coming as they were both ill – sadly they are both now deceased – and this delay meant I ended up submitting late, thus missing the cut on several jobs. Unexpected event no. 1. Two years later, I drove home clutching a bag of pills and a brand new diagnosis. Unexpected event no. 2. I wrote an article for the Independent – sadly now deceased – called ‘The Longest Wait‘. Here’s an extract:

My New Year was somewhat blighted by the revelation that I had acquired Parkinson’s disease. That’s how I put it. Acquired. Like experience. It just creeps up on you.
But here’s the rub: I don’t look ill; I don’t act ill; I don’t even feel ill, yet I am. And this is what’s strange. My life hasn’t been ruined by this disease – I’m not about to die – but it certainly has changed. The problem is that I don’t know what’s going to happen: all I know is that something will.

Moving swiftly on to 2013, I published a book called Slender Threads: a young person’s guide to Parkinson’s disease. In this I considered the fact that I did now know pretty much what was going to happen to me, and why. I merely lacked a ‘when’ and a ‘what it feels like’. Parkinson’s was, for me, a disease of anticipation. That was its ‘exquisite torture’, the inevitability it brought to the table. Of course, coming to terms with the inevitability of our decline is at the heart of the human condition. We all have our ‘Mistah Kurtz’ moment. A diagnosis like Parkinson’s casts this inevitability in a different light, however. It makes it visceral. It makes it come eversomuch closer. It makes it real. END_OF_DOCUMENT_TOKEN_TO_BE_REPLACED

As I sit, cross-legged on my bed, laptop atop my lap (as it ought to be), listening to the rain beat against the roof, waiting for the plumber to arrive, checking social media for, well, anything to distract me from the task at hand, I’m less concerned with being ‘in control’ than I am wondering what it means. END_OF_DOCUMENT_TOKEN_TO_BE_REPLACED 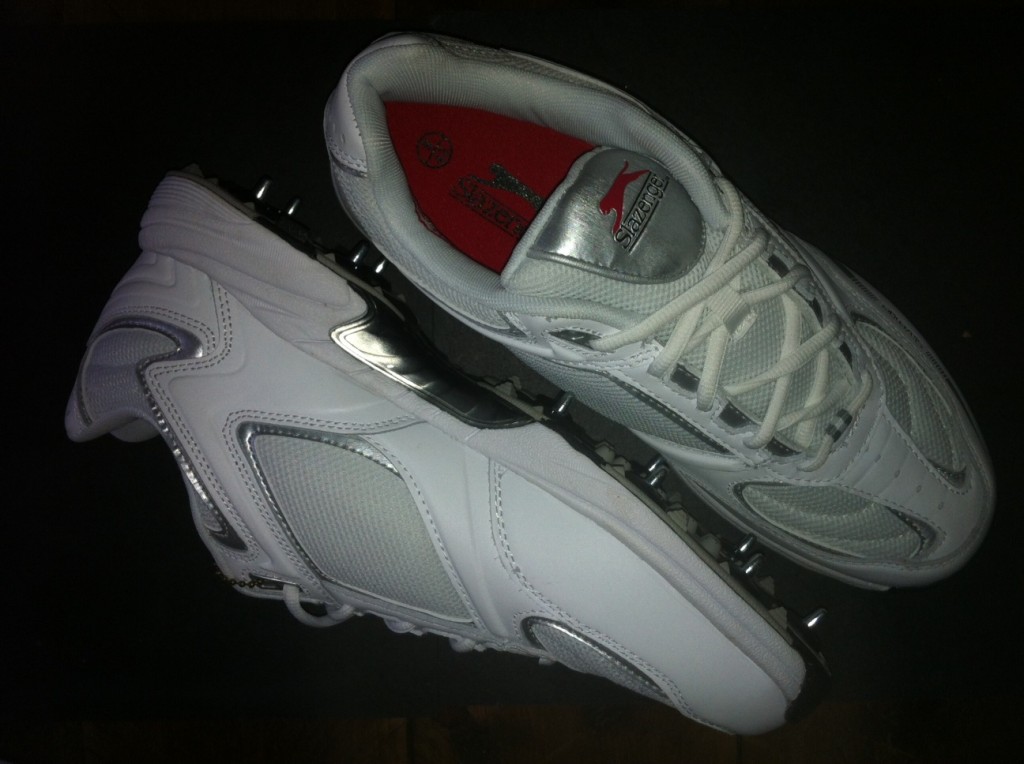 Cricket is a passion, and these are my as-yet unworn ‘season of 2013’ shoes. In these I will be travelling the country, playing cricket in country houses to write The Country House Cricketer, the proceeds of which will go directly to funding research into Parkinson’s. Parkinson’s is already affecting my game, but that just forces me to think of new ways to get round it, to frustrate this most frustrating of conditions. It’ll win, yes … but I’ll give it a damn good run for its money.