No, Not That Bell.

Silence comes in many forms. One of the most delightful is the silence of anticipation. The silence announced by the gentle intoning of the word ‘play’; the silence that builds as the bowler looks at their feet and begins their run-up for the first ball of a match. At the ringing of the pavilion bell, the rattle and hum of the Lord’s crowd falls to a murmur. And then, play.
Cricket is a not a game for those of an impatient disposition. It has never yet been described as a good queue, spoilt, but then again, I’m not sure Mark Twain ever sat padded up at no. 3 for thirty-something overs before walking out into the middle, taking guard, hearing the death-rattle of the stumps as they are splayed by a yorker of pinpoint precision and then walking straight back to the pavilion. 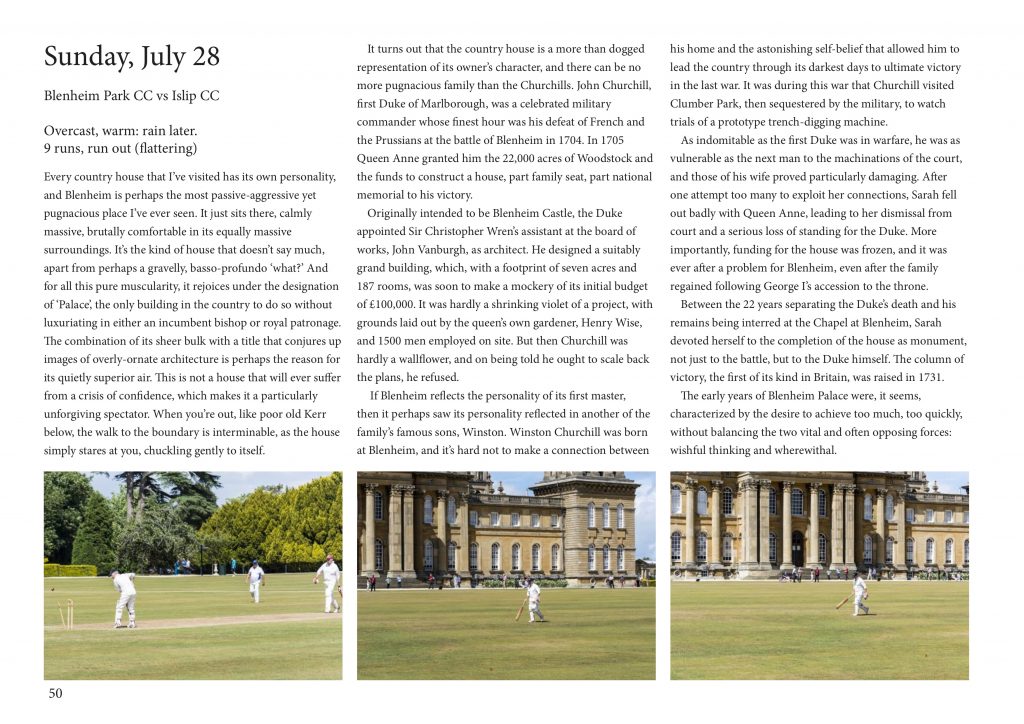 A golden duck is the single worst thing that can befall a cricketer on the field of play, injuries notwithstanding. A simple duck is bad enough – even the vital, fighting, defensive duck, like Jimmy Anderson’s heroic 55-ball effort at Headingly against Sri Lanka in 2014 – but it’s still a bloody duck (worse still if you lose the game anyway). But a golden duck is simply devastating, no matter what position you bat, or how good you think you are. We all hate getting a golden duck, and there are several reasons (apart from simply ‘it’s a golden duck, you *&%$’). It means we spent more time walking out to bat and back to the pavilion again than we spent in the middle. Dammit, we spent longer donning our protective equipment than we spent on the field. And, as if matters weren’t bad enough already, then we must suffer all the sotto voce expressions of ‘unlucky, mate’ and all the sympathetic pats on the back, while the next batsman is torn between the knowledge that they are now statistically less likely to suffer the same fate and the fear that this is exactly what will happen, thus falling to the unmentionable hat trick ball.
Us proper cricketers (I mean, us amateurs) are at least only subject to the common-or-garden duck. We are spared the indignity of the pair (as Graham Gooch recorded in his first test match in 1975), or the humiliation of the dreaded King Pair (a fate suffered by Adam Gilchrist in 2001). We do have an equivalent, of course. I once followed a Sunday golden duck with a second-ball duck the next. I was heard to mutter ‘it’s progress, at least’ as I trudged back to the pavilion. No, I didn’t believe it either.
For an opening bat, of course, the golden duck screams failure to the depths of your very soul, especially if you bat at no. 1. For this bat, the golden duck will naturally be the first ball of the team’s innings. There’s nothing quite so dispiriting for a side than to be rebuilding an innings before it has started, and that’s what you face as you walk back into the pavilion. But it can be worse than this. It can be the first ball of the match. The fickle nature of cricket means that this has happened to some of the finest players ever to grace the game, luckily, so at least you’re in good company. Over the past decade alone Andrew Strauss (Eng v SA, 2010), Chris Gayle (WI v Sri Lanka, 2010), and FDM Kurunaratne (Sri Lanka v SA, 2016) have fallen on the first ball of a test match, while KL Rahul (India v Sri Lanka 2017) and Dean Elgar (SA v Eng 2019) have had the misfortune to lose their wicket to the first ball of a series.
In these circumstances, the silence of expectation as the bowler begins their run-up is replaced by the muted silence of shock.
But today, as we await the rather strange re-commencement of test cricket without spectators (welcome to village cricket, chaps) at the Ageas Bowl, and the possible return of recreational rain (ahem) this weekend, these first balls take on a rather more terrifying aspect.
We have waited for cricket to be cleared of any suspicion of danger, and watched as a season of perfect weather has been replaced by rainy business as usual. We are now chattering with excitement at the thought of that first ball, now delayed once again, though at least in a more traditional fashion. For some of us, months of anticipation will be shattered in the space of one delivery. The cries of ‘Howzat!’ will be devastating, but they will, at least, confirm to us that cricket is back. And that so are we.
I can’t think of a way of ending this that isn’t mawkish, clichéd or crass. But you know, don’t you? Spare a thought for them.

ps. Sorry Dom, but it could have been worse, right?

1 thought on “The Silence of the Stands”